Improvements of the picnic area across from the fire station on Drakes Landing Road will start soon.  New concrete surfacing will replace the grass and the picnic tables will be replaced with a variety of seating options. Also coming are a new dog friendly drinking fountain; new benches and bike racks; replacement trash & recycle bins; and a bevy of new shade trees.

Speaking of new tables and benches, we could have hired a contractor to do the assembly (yawn) or have way more fun with a community build event! Once the delivery date has been confirmed, we will set a Friday morning date. 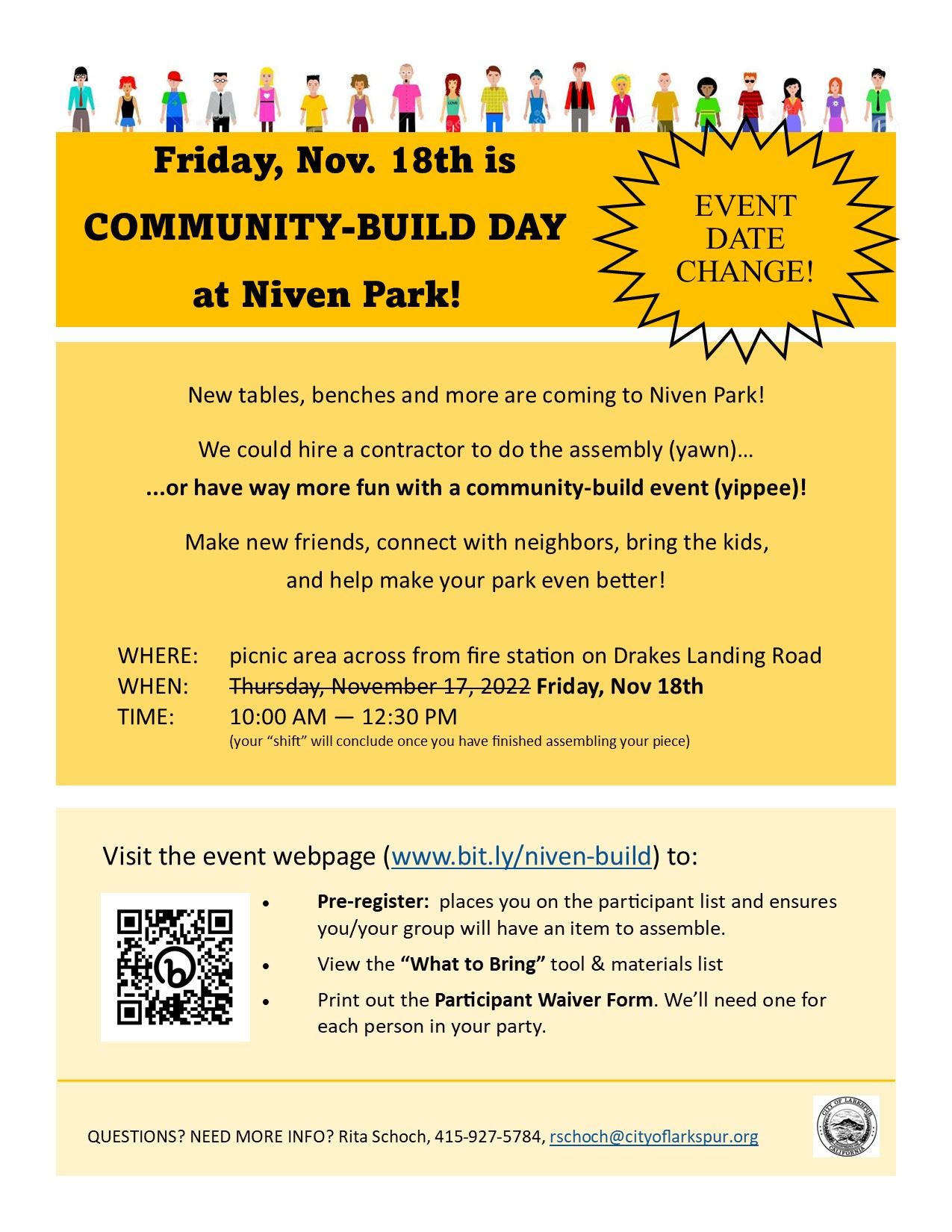 The landscaping of the park entrance planting area at Barry Way & Drakes Landing Road has been completed.  The plant selections are drought tolerant, California-native species.  They are colorful and pollinator-friendly!  By next year, they will be close to fully mature and will beautifully welcome park users for years to come. 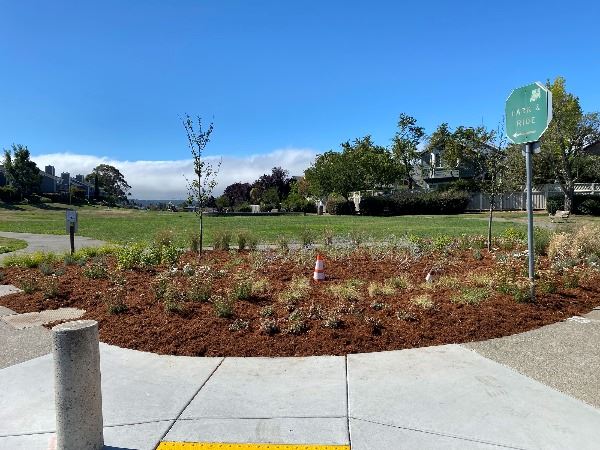 Wondering what plants are here?  Here is the full planting plan. 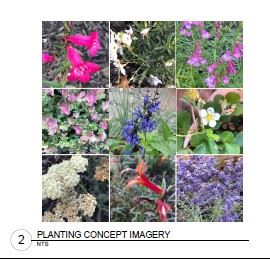 A new park sign is being fabricated and will be installed soon.  Here is a preview of what it will look like.  Thank you for your patience! 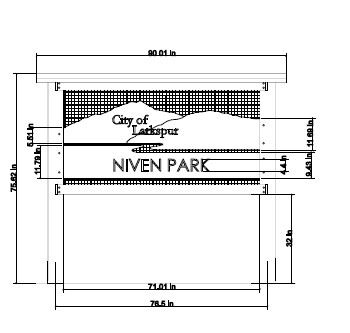 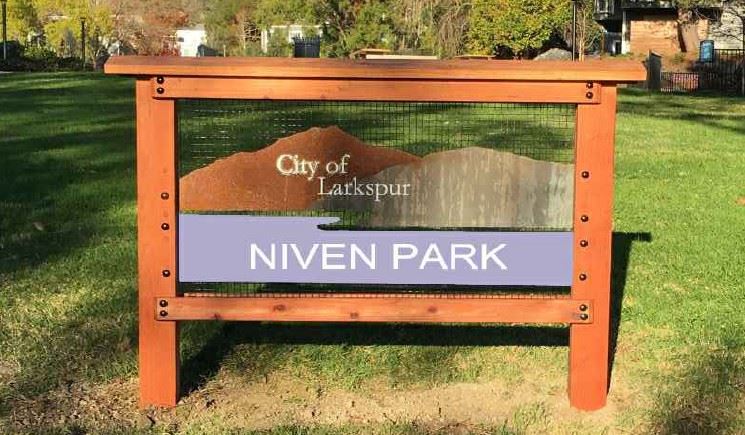 A private Greenbrae family has generously donated substantial funding for the playground project.  This significant influx of funds has allowed the playground area will be expanded, adding several new pieces of play equipment; a cozy family picnic area; a short perimeter safety fence; and lots unique landscaping, pathways, shade trees and visual elements.  The theme is nature-based and discovery-zoned, with a mindfulness toward universal accessibility.

Interesting side note -- the stunning centerpiece of the playground will be the "Forest Hut" by Eathscape. Stately standing at 21-feet, its slender, slatted design is diaphanous yet whimsical.  You can see a smaller version of this structure at the new Presidio Tunnel Tops park in San Francisco. 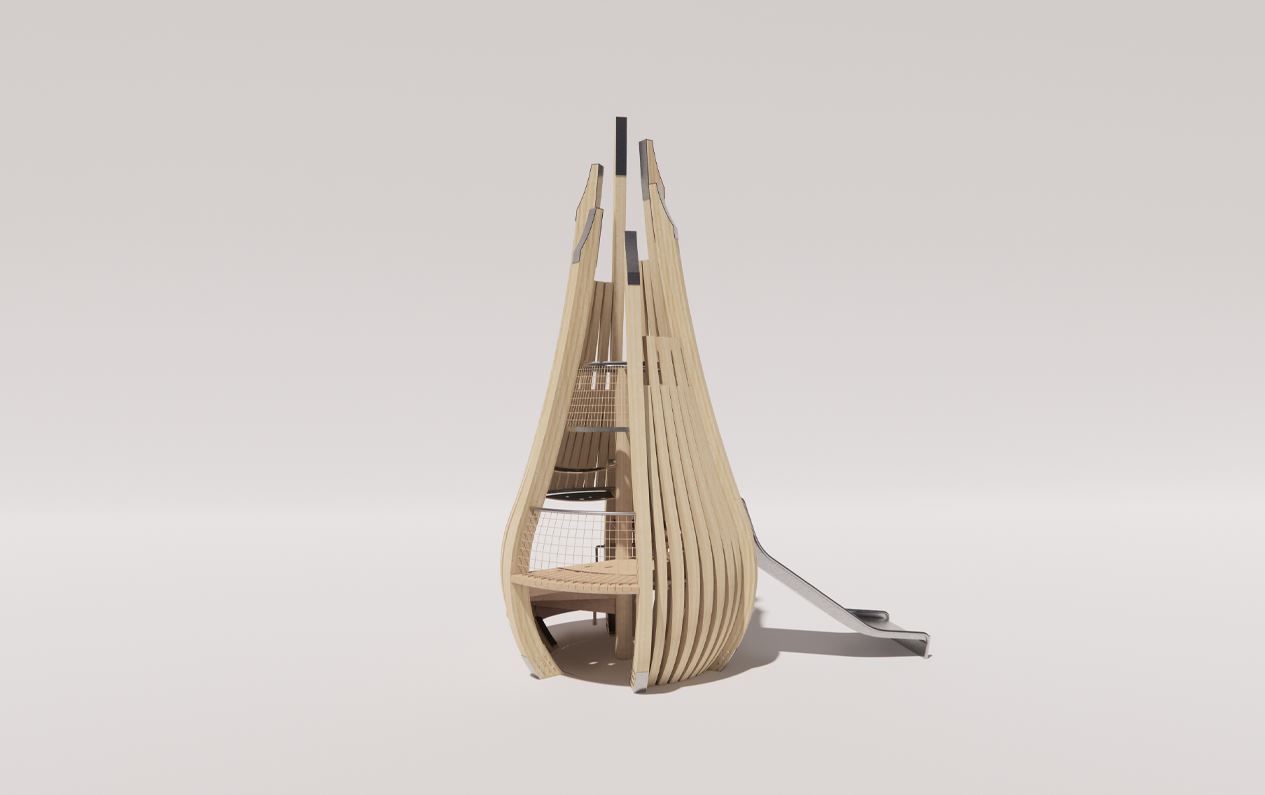 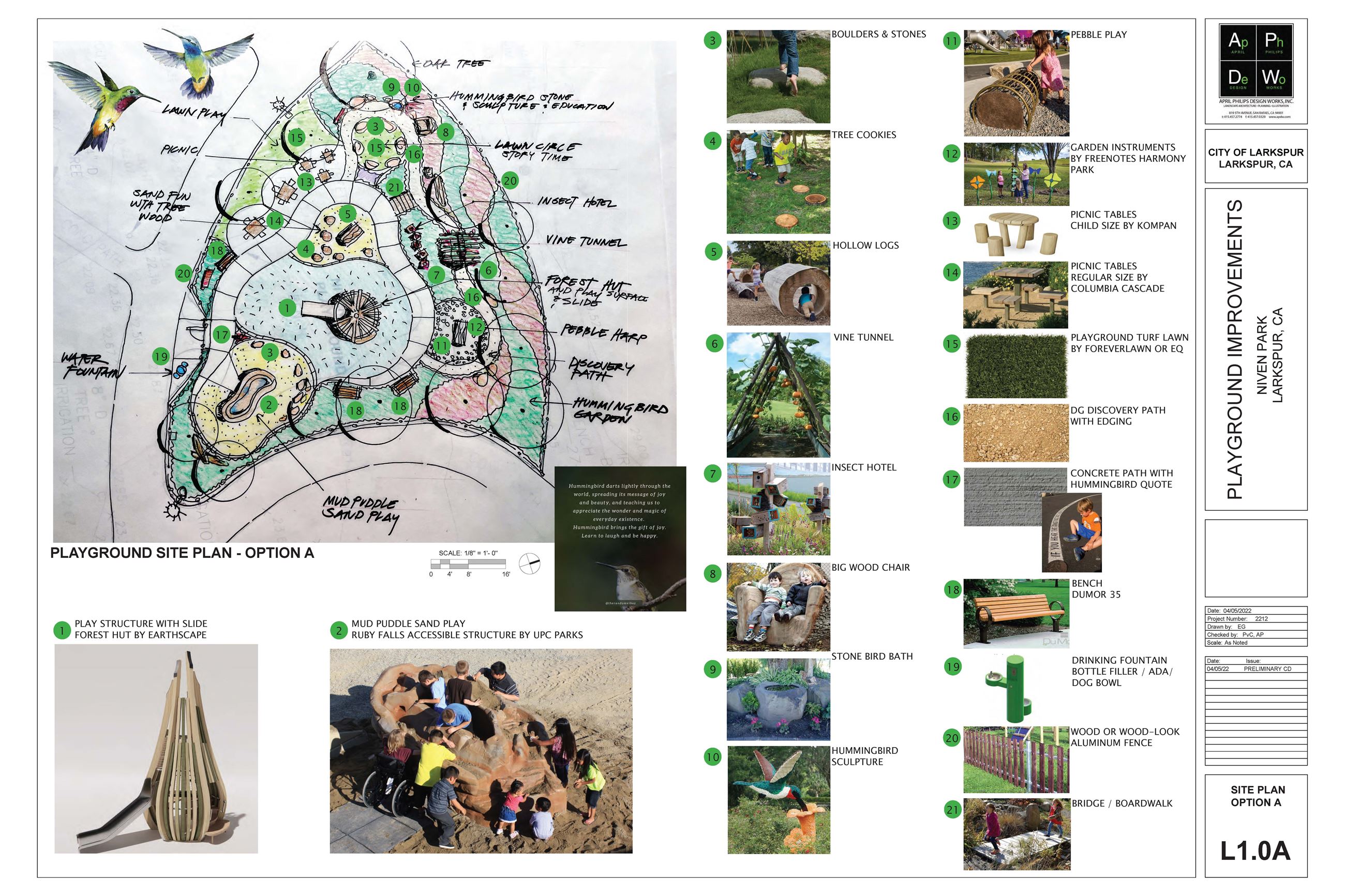 Based on community input from the public survey conducted in August 2021, the areas of Niven Park that will be upgraded are:

This project will use funding from: 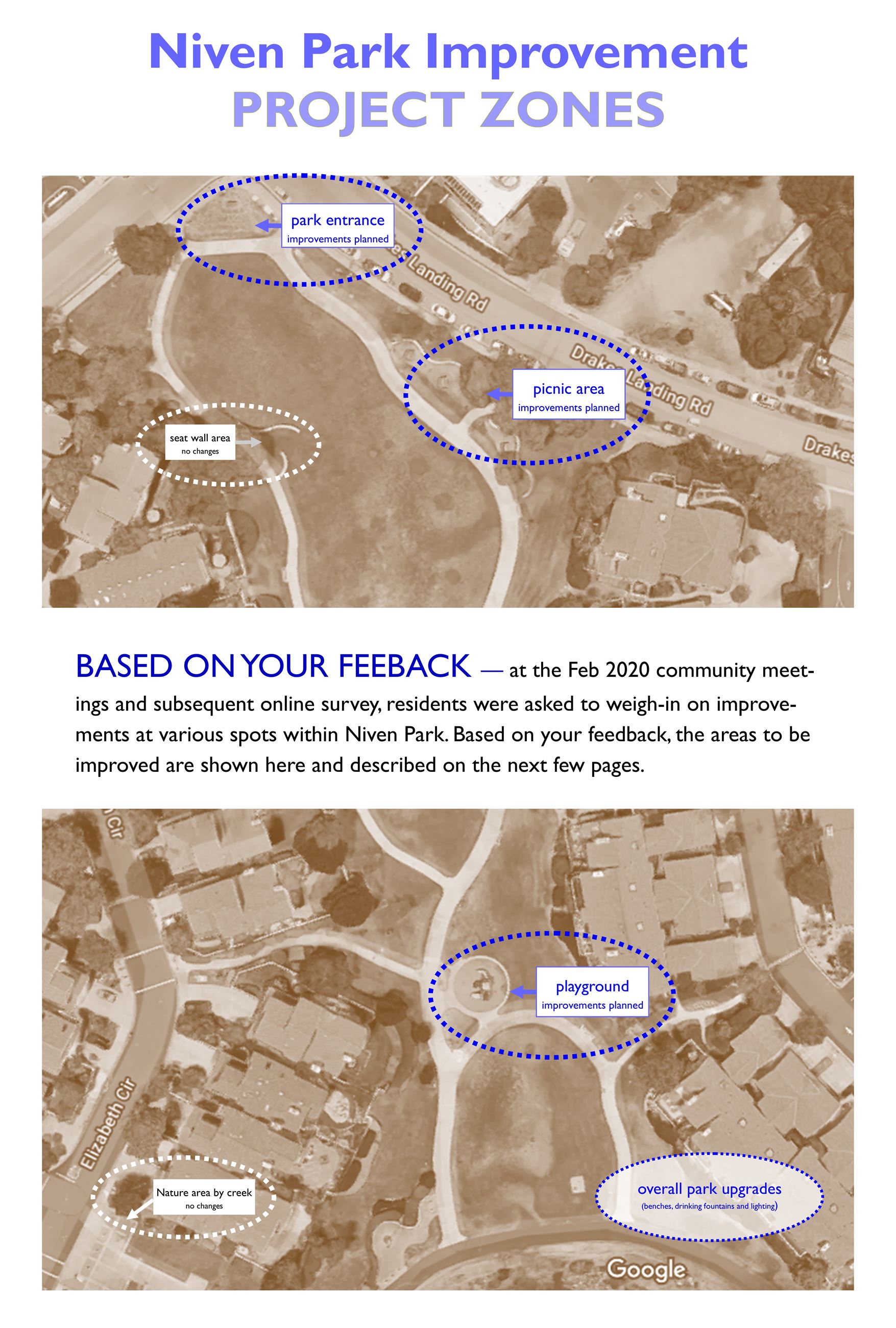 In February 2020, City staff conducted two community meetings, inviting residents from the neighborhood adjacent to Niven Park as well as members of the general public.

Approximately 60 people attended the meetings. City staff encouraged a two-way discussion to solicit community feedback about what upgrades were and weren't desired at Niven Park.

The feedback from these in-person meetings formed the basis of a follow-up online survey, the results of which was used to develop the Preliminary Concept Design. 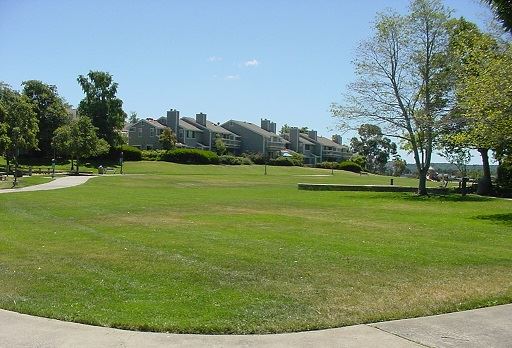 Two community meetings were held in February 2020 as information gathering sessions.  Concepts and ideas were presented by City staff,, then the public was given an opportunity to comment and provide feedback. In attendance were:

Based on the feedback from the community meetings held in February, City staff created an on-line survey and invitations to participate were sent to the same list from the first round of public outreach during April thru June 2020.

Staff posed a series various park upgrade scenarios and asked survey takers to rank their desire to see these improvements made.  The results were then used to develop a preliminary scope of work and design concept. 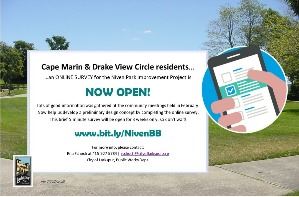