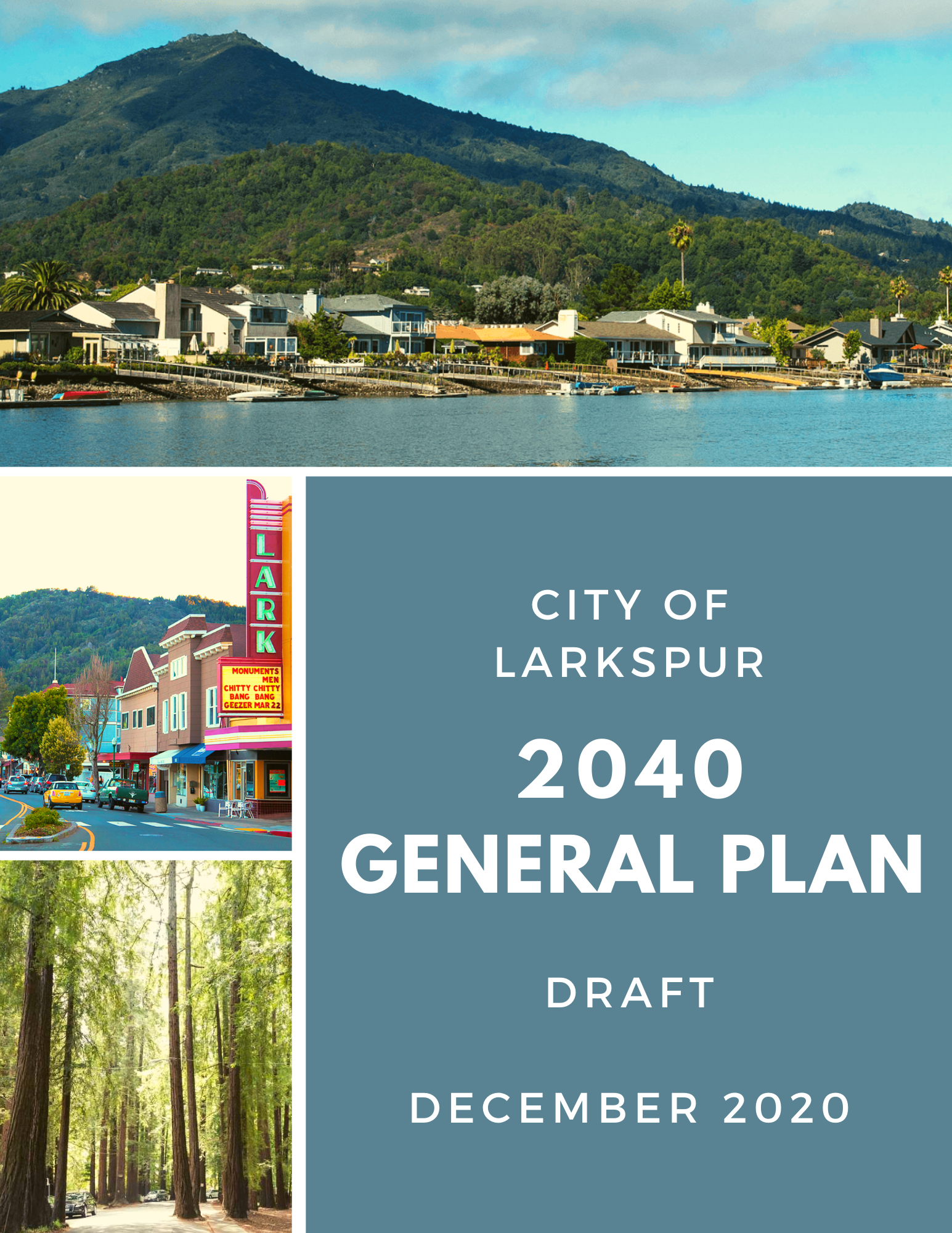 30-DAY NOP COMMENT PERIOD: The City of Larkspur is soliciting comments from responsible agencies, trustee agencies, public agencies, organizations, and members of the public regarding the scope and content of the Program EIR, and the environmental issues and alternatives to be addressed in the Program EIR. In accordance with the time limits established by CEQA, the NOP public review period will begin on January 4th, 2020, and end on February 4, 2021. Please provide your written/typed comments (including name, affiliation, telephone number, and contact information) to the address shown below by 5:00 p.m., February 4, 2021. To be placed on the notification list for this project, or need additional information, please contact: 2 Neal Toft Director Building and Planning City of Larkspur 400 Magnolia Avenue Larkspur, CA 94939 Phone: 415.927.6713 Email: ntoft@cityoflarkspur.org

Connect with Us: Sign-up here to receive email updates about the General Plan Update. To submit public comment on draft materials send an email to generalplan@cityoflarkspur.org.

What is the General Plan?

The General Plan is the principal policy document guiding the development and conservation of local municipalities and is often referred to as the “constitution” of local development. The General Plan also reflects the vision and values of a community. The City's General Plan serves as a basis for decisions that affect the City’s growth and development, relative to transportation, land use, streets and infrastructure, parks and open space, housing and neighborhood character, recreation and community facilities, downtown, environmental resources, public health and safety, and hazards such as wildfire and flooding.  The General Plan is a strategic and long-term document identifying goals and polices that guides and directs the City in terms of implementing policies, programs, and resources.  While serving as an overarching guide for the future, many of the policies and program of the General Plan are implemented through other specific documents, regulations, and programs, such as the Municipal Code, the Capital Improvement Program (CIP), and the Bicycle and Pedestrian Master Plan (BPMP), to name a few.

To remain effective, a General Plan usually focuses on a time horizon of 10 to 20 years.  The City's General Plan was last completely updated in 1990 and has been subject to several amendments since that time.  Because Larkspur is a largely a built-out community, there has been little change to the long-range development vision of the community.  The community prizes the city’s existing small-town character and its historic downtown and neighborhoods.  However, as perspectives on land use and environmental issues continue to evolve, the City’s General Plan requires substantive update to address new State mandates and the impacts of climate change.  With adoption of an updated General Plan in 2020-21, the City is looking towards a 20-year timeline to 2040.

the City of Larkspur’s Draft General Plan addresses updates to six of the seven required "elements": Land Use, Circulation, Conservation, Open Space, Noise, and Safety, as required by State law.   However, the Housing Element was last updated and approved by the City Council on May 20, 2015 and approved by the state Housing and Community Development Department on May 28, 2015.  Consistent with State Law, the current Housing Element remains effective through 2023.  The City will initiate update to the Housing element for the 6th Regional Housing Need Allocation (RHNA) cycle in 2021.

Background on the General Plan Update

Ultimately, the City Council chose not to adopt the Station Area Plan. Following that decision, it was necessary for the City to focus on several other key planning processes, most notably updating and obtaining recertification of the City's Housing Element Update before returning to the General Plan Update.

In 2016 the City re-initiated the update of the General Plan.  At that time, it was clear there was additional work needed to address further changes in State Law, changing conditions within the City, and finished formatting and graphics for the documents.  On March 15, 2017, the City Council authorized formation of a General Plan Update Steering Committee (GPUSC) to be comprised of two Councilmembers and two Planning Commissioners, to build upon the earlier efforts of the General Plan Update Citizen Advisory Committee (CAC).  Since that time, the GPUSC has met 13 times with two public workshops. On October 12, 2020, the GPUSC approved the Administrative Draft of the General Plan Update 2020-2040, including all major policies, action programs, and updated data and diagrams. Information on the GPUSC review process and the draft elements approved by the GPUSC can be reviewed on the GPUSC webpage.